Please support by signing the Fair Deal for Maghull campaign petition using the link below:-

Maghull Town Council has launched a joint campaign alongside Lydiate and Aintree Village parish councils. The Fair Deal Campaign aims to secure a return of funding from Sefton Council that had previously been received by these local councils. The councils are asking for funding earmarked for them to stay in Maghull, Lydiate and Aintree rather than for it to continue to be allocated elsewhere across the borough. The funding is needed to maintain and improve local services in particularly the parks and open spaces managed by the three councils.

Maghull Town Council Leader Cllr Patrick McKinley said “Over 85% of town councillors voted in favour of starting this campaign, which we believe is simply about Maghull receiving a fair share of funding. We recognise that some areas of Sefton suffer from multiple deprivation and we support any initiative to protect the most vulnerable. This campaign is not an attempt to rob Peter to pay Paul, rather it is a reasonable request to treat Maghull as equitably as other areas of the borough. We can see the green shoots of regeneration funding and investment being planted in areas right across the borough, we are simply asking for a fair share of funding for Maghull, Lydiate and Aintree”

Councillor John Sayers said “Maghull and district has a high percentage of over 65 and over 85s and as such there are needs that go unmet, also we have the highest incidence of certain cancers in the whole of Sefton. The sheer amount of new development is going to put immeasurable strain on the community infrastructure which is already creaking at the seams. By any objective measure this should mean that additional funding should be deployed to Maghull.” 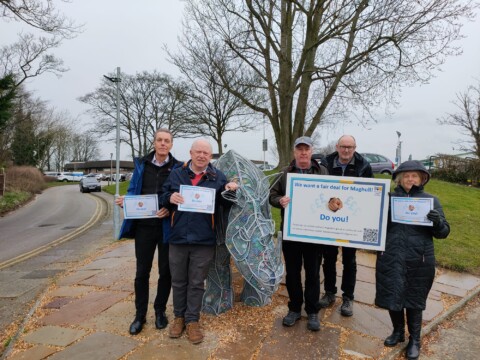 The campaign is asking that Sefton Council restores the double rating once received, and that the councils also receive a share of the New Homes Bonus and section 106 funding that help mitigate the impact of new house building. This is particularly important in Maghull which is set to see 1700 homes built on land east of the town but as things stand will receive no funding. Leaflets explaining the details of the councils’ concerns will be delivered to all

homes in the coming week. Councillor Yvonne Sayers said “ We have been successful in maintaining our parks and community projects but now we are really feeling the strain, some councillors have reported that it feels like we are taking all the pain from development with no gain. Our fair funding requests will dispel this view.”

Councillor Frank Sharp added ‘ we call on all residents to help us by getting involved in the campaign. The first step would be to complete our petition and return it to Maghull Town Hall. For further information the Council is urging residents to visit its website and sign the petition at maghull-tc.gov.uk or call Community Services Manager Phil Dillon at the Town Hall on 0151 526 3705.

As a result of the Full Council meeting on 2nd February where the budget for 2022– 23 was discussed fully and openly I have been tasked with writing to you to formally request that Sefton Council do the following
• Reintroduce the double rating for Maghull
• Allocate a fair share of the Maghull generated New Homes’ Bonus in Maghull e.g., 25% of the bonus as we are taking 25% of the homes when we have only 12% of the need (similar to that we would have received if the Community Infrastructure Levy had been introduced)
• Guarantee that any Community S106 monies raised by development in Maghull received by Sefton MBC through Planning Obligations be used in Maghull.
• That Community S106 monies be used for the strategic priorities as detailed in Maghull Town Council’s Neighbourhood Plan
• That any Recreational Mitigation Strategy monies raised by development in Maghull be used to support Maghull based diversionary activities as detailed in Maghull Town Council’s Neighbourhood Plan.
The Town Council is very concerned that development in Maghull is being used to fund projects outside of the area. Whilst Sefton Council continues to remove essential funding from the area to support other areas in the borough Maghull feels that it is being left behind. There is no plan for the District Centre, no plan to provide funding for essential services and there is no suggestion of any funding being provided by Sefton Council to the Town Council despite requests to do so e.g., the S106 funding from the Aldi development to be used to improve the play area offer at Moorhey Park.

This was requested in November 2021 and no response has as yet been received. It should be noted that Maghull residents have never benefitted from the Community Transition Fund
The top slicing of monies from development in Maghull should be automatically used within the Town Council area and a mechanism needs to be put in place to reflect this.

This letter has been written with the support of the Town Councillors listed below:

We look forward to receiving your response in the near future. However, if anything is unclear or you have any queries, please do not hesitate to contact the Town Council.

You can find out more about which cookies we are using or switch them off in settings.

This website uses cookies so that we can provide you with the best user experience possible. Cookie information is stored in your browser and performs functions such as recognising you when you return to our website and helping our team to understand which sections of the website you find most interesting and useful.

Strictly Necessary Cookie should be enabled at all times so that we can save your preferences for cookie settings.

If you disable this cookie, we will not be able to save your preferences. This means that every time you visit this website you will need to enable or disable cookies again.